Prof. Lillis Ó Laoire: The Music of the Irish Keen The Centre for Irish Studies cordially invites you to the lecture “‘Excellent in … Both Music and Words’ – Ceol an Chaointe: The Music of the Irish Keen” by Prof. Lillis Ó Laoire (National University of Ireland, Galway) on Thursday 5 May, 10:50, Room 1 (Faculty of Arts, nám. Jana Palacha 2, Prague). All welcome!

The event has been kindly supported by the Department of Foreign Affairs, Ireland.

Lillis Ó Laoire is a professor in Irish in the School of Languages, Literatures and Cultures, and was Head of School from 2010-2014. He was also a visiting Professor in Modern Languages and English at Loyola Marymount University, Los Angeles from 2002-2005. Ó Laoire is a native of the Donegal Gaeltacht in northwestern Ireland. He has published many scholarly works on Gaelic song, including the award-winning Bright Star of the West: Joe Heaney, Irish Song Man (with Sean Williams). He is an accomplished sean-nós singer, appearing at international festivals such as Irishfest Milwaukee. Among other honours, he was TG4 Gradam Ceoil singer of the year in 2020.

The Centre for Irish Studies gratefully acknowledges the long-term financial support of the Department of Foreign Affairs, Ireland (most recently from its ESP/Irish Studies Programme). Irish language teaching is funded from a grant awarded by the Department of Culture, Heritage and the Gaeltacht, Ireland. Our special thanks are due to the Embassy of Ireland to the Czech Republic for their unrelenting encouragement and support. 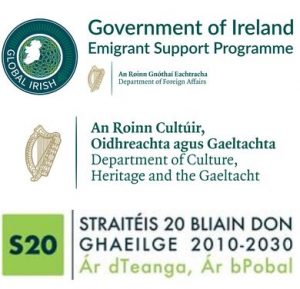